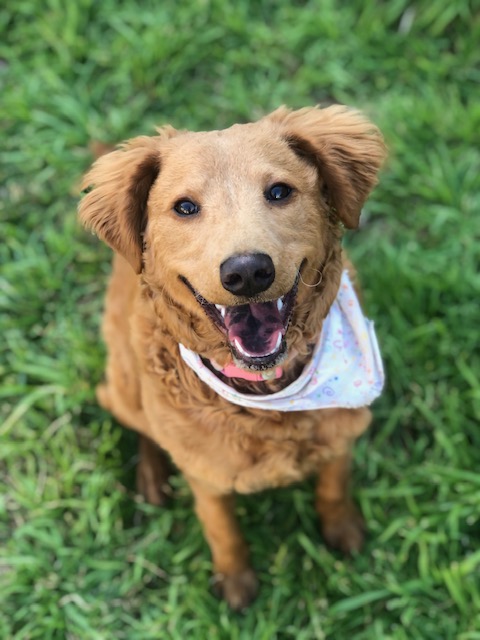 Why Force Isn’t the Way to Train a Dog

Back when I started exploring dog training in the 90’s everything was very “my way or the highway”. The trainers that I observed or were trying to learn from often got gruff and bossy with the dog they were working with. Many times, I watched as the dog in question would guardedly comply, nip at the leash or get increasingly animated and agitated.

Things felt wrong to me, and I was certain I didn’t have what it took to be a dog “trainer.”

When I look back on this time, I want to yell at myself saying, “don’t just stand there, do something!” I suppose I was paralyzed by youth and inexperience, and maybe the feeling that my opinion didn’t matter.

Now that I’m in my 50’s and feeling the confidence that comes with some age and wisdom. I’m so grateful to have a thriving dog training business based on my beliefs of utilizing peace, patience, and fun.

Being heavily entrenched in rescue as well as working with people’s dogs who are struggling with an array of behavior issues, I commonly find dogs who have been yelled at, forced into situations or positions, or even physically disciplined. Mind you, the owner either isn’t present as in the case of a rehomed dog, or the owner doesn’t admit to losing their temper or using other aversive techniques they saw on the internet. In the worst cases, dogs might need months of careful work to regain a trusting stance with humans after the trust in us has been utterly and quickly broken with prior aversive training methods.

Two firm examples of this are currently under my roof. The first, a young female golden mix who injured a child’s face in a situation that occurred before I got her. Upon evaluation, this dog presented as a silly, easy going, albeit rambunctious girl. I simply couldn’t imagine why she made the choice to hurt a child when she appeared to be very happy overall. One day, my assistant, Chelsea Morel, was playing with her and moved her collar to scratch underneath it. Typically, a dog loves this special touching because they don’t often get touched there, however, this dog snapped at Chelsea. Taken aback, Chelsea ended playing with her on a positive note and contacted me immediately. After some further research with the previous family, the dog was routinely moved about by the collar. When the dog began to snap at the kids for grabbing her collar, the family bought a harness with a handle on it thinking this would solve the problem when in fact it increased the conflict for the dog. As I was discussing this with the family, I wondered out loud if maybe someone had grabbed her harness at the time of the bite and the smaller child was positioned between the dog and the person grabbing the harness. Which turned out to be exactly what happened.

This is obviously an extreme example of what harm can be done between a dog and their relationship with their family. People routinely grab collars and pull their dogs off the couch or put them in their crate for a nap. What if your dog finds this continually upsetting and you keep doing it not realizing the harm that is being done each day?

Another example is much simpler and extremely common. My husband found a senior mini dachshund running loose in an open field. After looking for owners and waiting for the phone number on his microchip to yield a response from an owner we decided to keep him. This little man we named River, is perfect in every way except for some separation anxiety from my husband. We quickly discovered in our time with River that when he is crying for my husband, we cannot say the word “no”. When River heard “no”, even in the gentlest of tones, he would cower and hide. Now, it is very hard to imagine someone yelling at this sweet little guy, but that is exactly what must have happened in the previous home. It’s really heartbreaking to me.

With both dogs, my goal has been similar. Regain their trust in humans, and lovingly guide them through games, and shaping so we can build a common language with them. Currently, both dogs are thriving, feeling respected and confident with great things on the horizon. 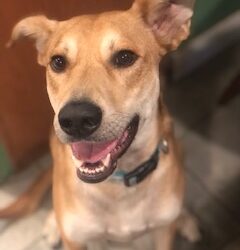 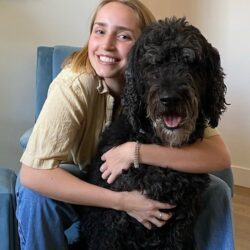